High March is proud to be able to offer three distinct awards, the Del Anderson, the Robert Anderson and the Anderson Family scholarships, in memory of Mr and Mrs Anderson, the grandparents of the current Directors of the School.

The Del Anderson Poetry Scholarship is endowed in memory of Mrs Del Anderson whose enduring love of poetry was reflected in her inspirational teaching of the subject for many years at High March. The Scholarship is open to High March girls in Year 5, is tenable for one year in Year 6 and is to the value of 100% of the basic school fees for that year. It takes place during the Spring term, usually in late January.

The Del Anderson scholarship is rigorously assessed and is awarded to a child who is able to demonstrate knowledge, appropriate to her age, of English poetry of different styles and periods. Of equal importance is a sensitive and imaginative response, as well as the ability to enjoy poetry in its spoken form. Pupils will be asked to create a short anthology at home containing five poems, each of which should be illustrated and accompanied by a short analysis and an explanation as to why it has been chosen. There will also be a set poem, which girls will need to learn off by heart and then recite in School; questions will also be asked to elicit the child’s understanding of and imaginative response to the poem. Finally, there will be a written comprehension and appreciation test.

The Robert Anderson Scholarship was established by Mrs Anderson in memory of her husband. It is held for three years in Years 4 to 6 and is the value of one third of the basic school fees. This is an academic scholarship and it is awarded on the basis of a girl’s performance in the Year 3 end of year internal examinations and CATS test results.

In the academic year 2010 to 2011 the Anderson Family endowed for the first time a Drama and Music Scholarship in recognition of the success of generations of High March pupils in the arena of the Performing Arts. High March has acquired a reputation for producing some fine actresses and musicians and this Scholarship reinforces the School’s commitment to a broad and rich curriculum and belief in educating the whole child. The Scholarship provides financial assistance to the successful pupil or pupils to pursue their love of and interest in Drama and / or Music.

The Scholarship is open to pupils in Year 4 (whether attending High March at the time of application or not) exhibiting particular talent in the realms of  Drama and / or Music. The first stage of the Drama Scholarship consists of an audition involving a ‘blind’ mime. At the second stage of interview, the short-listed candidates are asked to perform a set piece and to undergo an interview with the Selection Panel. Regarding the Music Scholarship, all applicants must have attained a minimum of around Grade 2 ABRSM or Trinity Board Standard in at least two instruments, one of which may be voice. All qualifying applicants are asked to participate in an assessment which will comprise an audition on two instruments, aural tests, sight reading, testimonials from the relevant peripatetic music teachers and an interview with the Selection Panel.

The Scholarship is tenable in Years 5 and 6 and covers 10% of the basic termly fee, together with free speech and drama tuition over this period (for the Drama Scholarship) and free tuition on one musical instrument or voice (in the case of the Music Scholarship.)

Selection for The Anderson Family Drama and Music Scholarships takes place during the second half of the academic year. 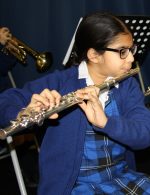