Learning all about the Great Fire of London 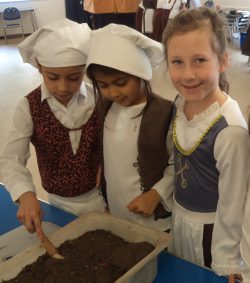 On Monday 23rd September, Year 2 went on an immersive journey back in time to the year 1666. They began their morning working at authentic seventeenth  century London trades, such as chandler, scrivener, tanner (to name a few). Then they heard news of an outbreak of fire in Pudding Lane in the east of the city. They had to practise bucket lines in case the fire spread. As the morning progressed, the fire worsened, so they abandoned the city of London for the safety of Moorfields, to find out a little bit more about what life would have been life for the people who lived in the time of the Great Fire of London.

In the afternoon, the fire was finally out, so the girls had to begin the task of rebuilding the city. They had to sift through the remains of houses in order to identify the person who had lived there. They looked for historical clues based upon the work we had done that morning.

The girls had a fabulous day and truly entered into the spirit of things. They learnt a great deal too, about the Great Fire itself, but also about the ordinary lives of the people who lived through that event.