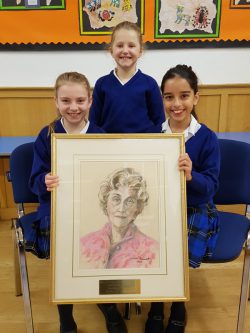 Earlier today, the children and staff at Upper School were pleased to welcome Governors as they joined us for our annual Prayers in memory of Mrs Del Anderson who was Headmistress from 1948 to 1981, Principal and Chairman of Governors until her death in 1999, and Mr Robert Anderson, who was Headmaster from 1948 to 1974.

We remember Mr & Mrs Anderson every year by holding a special Commemorative Prayers as close as we are able to Mrs Anderson’s birthday, January 28th.   As well as singing the two favourite hymns of Mrs Anderson   and Mr Anderson, respectively “Morning has Broken” and “He Who Would Valiant Be”, we were privileged to hear Giaan’s flawless vocal performance of “Hebe” and the recitation by our Del Anderson Scholar of “A Soft Day” by Winifred Letts.