Year 3 go on an Egyptian Adventure 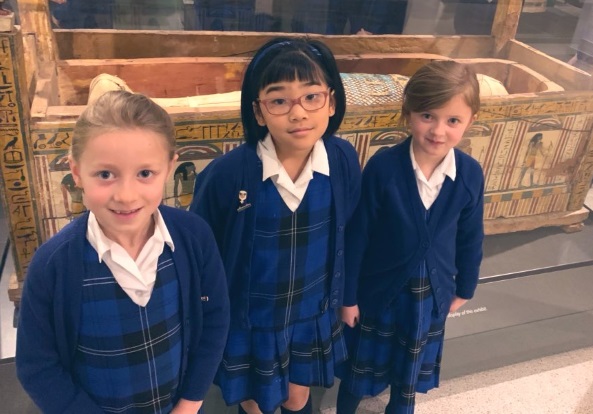 On Wednesday 26th February Year 3 ventured into Ancient Egypt at the Ashmolean Museum in Oxford. Led by the Ashmolean staff, they entered a shrine and used clues on the walls to work out which Pharaoh had ordered it to be built. They then continued to develop their archaeological skills in small groups by examining artefacts and figuring out what they were and sharing an archaeological report. They explored the sarcophagi of two mummies – a female musician and a priest. Their final task involved being given a suitcase with five clues and working out which Egyptian character that they had met that it belonged to: the Pharaoh, musician or priest. The girls shared their Egyptian knowledge enthusiastically and made excellent archaeologists!

After lunch the girls walked to the Pitt-Rivers museum and continued their explorations by following an Ancient Egyptian artefact trail. Here they found more clues about Egyptian life including amulets, a cat goddess and a scarab beetle with hieroglyphics on it. And, of course, all good museum visits end with a visit to the gift shop!

The girls impressed the staff with their curiosity and enthusiasm and everyone enjoyed experiencing Egypt come to life at the end of their History topic.